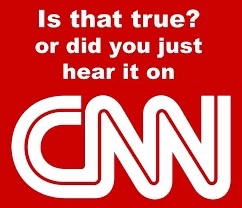 Con News Network, CNN has a lot of traitors who think they are journalists. Don Lemon and Chris Cuomo are two of many truly despicable ones. Don Lemon was telling Chris Cuomo that the democrats have a blind spot because the polls are showing that the riots and the violence are hurting the democrats in the POLLS. Don Lemon you are disgusting. I do not judge you by the color of your skin or sexual preference. I judge you by your lack of decency and lack of character. I judge you by your arrogance and know it all attitude, and unprofessional conduct. Chris Cuomo is no better, but then again CNN has so many of the democrat propaganda con artists posing as independent news and journalists. Add Wolf Blitzer and Anderson Cooper to the list. So as not to have discriminated put Dana Bash and Erin Burnett and Alisyn Camerota to the list too. There are far too many to mention.

Your concern about the riots and the looting and violence was ONLY due to the polls ? In other words the lives and properties of innocent Americans was not of concern to you. Police being harassed and beaten and Trump supporters being shouted down and beaten and threatened was not important enough ? Shame on you and your associates and CNN. Just for the record, MSNBC and all of the MSM is no better You are the misinformation arm and the propaganda arm of the fascist, socialist democrat party. You are NOT NEWS ! You have been bought and paid for like the deplorable scums you all are !