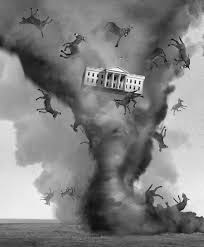 One thing Democrats have. They always stick together. No matter how corrupt or dishonest a member is found to be, they will support him or her and never abandon him. Hillary acid washed 33, 000 emails after being subpoenaed, but they never denounced her. Biden has been bribed but they stick by him.Maxine Waters encouraged open violence and they say and do nothing to her. No matter how corrupt, how rotten, when it is one of “them” they are behind him. Nothing is too scandalous or dirty or beneath their dignity, if it is one of “their own “.  Not one democrat denounced the phony impeachment ! The fake news, MSM allows them to get away with all their wrongdoings.
The latest, for the few days left before Election Day, is to propagandize the “Covid spikes and increases”. They can’t fault Trump for the economy or for jobs or for trade deals or for the stock market rise.They cannot fault him for reducing taxes and regulations. They cannot criticize him for starting a war. They cannot fault him for the prosperity and wealth he created.  They cannot fight MAGA or KAG.They cannot fault him for lack of “ventilators” and masks. They cannot say he is not close to having a vaccine for the virus.
They can do one thing and one thing only. They can order the fake news, and their operatives and their MSM corrupt allies and spinsters and activists and other hypocrite allies to falsely claim that the Covid is “spiking” and blame him for doing a terrible job in handling it. They can pretend as though if they were in charge nobody would have died. He acted sooner than all of them, despite their criticism, yet they say he killed two hundred thousand plus Americans. He acted while they were shamelessly trying to impeach him for no good reason. Any one else, in his position, would have been totally distracted , They, the democrats, would have let die millions. Cuomo was one who really caused the death of innocent elderly New Yorkers.
Do not pay attention to these false claims of “spikes”. This too is propaganda and misinformation and political warfare.
None of my family or friends or their friends or their families have had any “NEW” Covid virus spike or sudden increase.
Many others tell me the same thing. Check it out for yourselves.
God bless President Trump and God bless America !