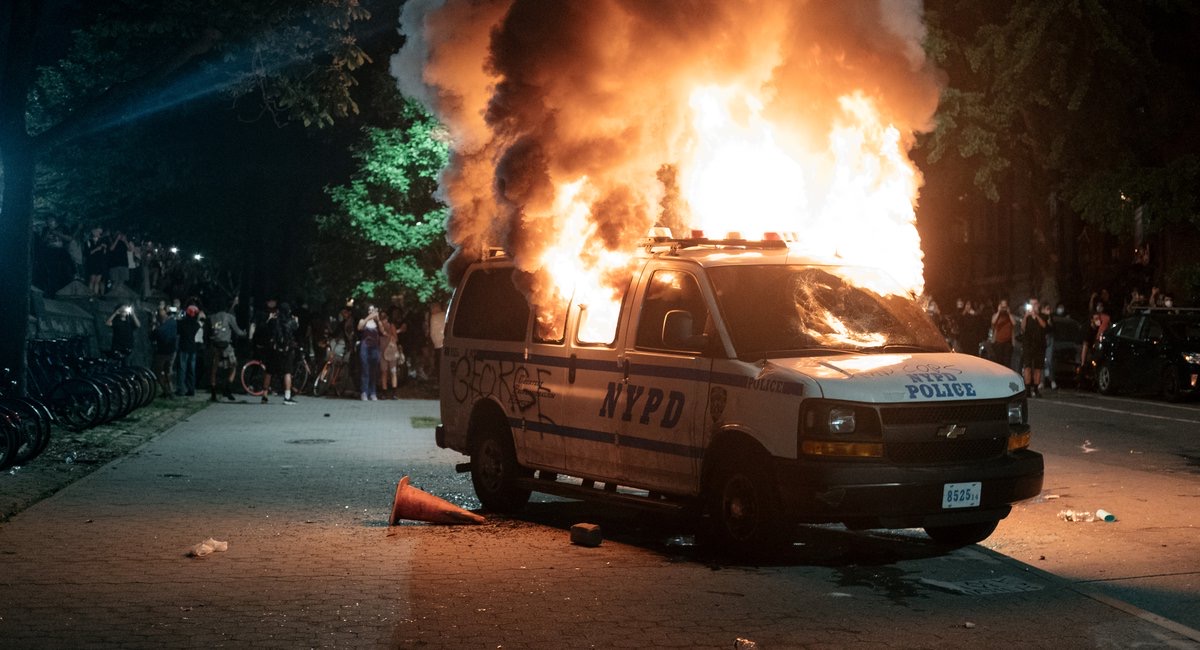 Leave it to the intolerant, violent socialist democrats to come up with terms that only they can think of and create. Almost every one of their slogans is intellectually manipulated and dishonest.

I just saw the statue of Christopher Columbus be torn down. All of a sudden, my life has changed for the better. I feel less oppressed and much more liberated and joyful. I feel justice and equality more than ever before. The job market opened and minimum wage went way up and my future looks much brighter. When I walk out, no matter in which city or state, the air feels lighter and the weight of tyranny and injustice seems to be gone. That statue really weighed heavily on me and I felt I  couldn’t breathe.

Erasing history by removing monuments of The Confederate States of America and trying to destroy or vandalize the statue of Abraham Lincoln, and the statue of Ulysses S. Grant and so many others is truly an uplifting experience. Now I feel the equality, and the quality of my life improving. Opportunities have increased so much for my family and myself. Abraham Lincoln, this privileged white man, from the most humble beginnings who freed slavery with a civil war was evil. The 750,000 thousand people, a vast majority white people, who died in this war to abolish slavery were evil too. They took their “white privilege” with themselves to their graves ! Yes, white people with white privilege fought with black men to free the black man from the evils of slavery !!

This oppressive country, which allows me to tear down statues and monuments and burn buildings and occupy whole sections of cities must learn what FREEDOM is ! Freedom is to riot and loot and burn and destroy and kill innocent people and to defund the police and to get right out of jail after committing serious crimes without bail or any punishment.

Freedom is calling  members of law enforcement, “Stormtroopers”, Nazis” “thugs” and  calling The President, ” Hitler”  and a Nazi. The protest in many cities have become totally violent and life threatening of the innocent. Not one democrat leader has come out to denounce or condemn the violence, NOT ONE ! Pelosi and Schumer and  Biden and most of the democrat city mayors and governors have encouraged the violence, rather than use the police to end it. They condemn the DHS forces for going to stop the destruction of federal property and buildings.The democrats blast federal crime crackdowns.Obama, Hillary, Kerry, Schiff , Nadler and other “democrats”, all silent and complicit in their absence and silence.

Anarchists, extremists, fanatics, thugs and criminals and fascists are acting with impunity and not one “democrat” has come out against it !.You see, they think that they are immune to anarchy and fascism ! They say “we are on your side” ! Little do they know that extremism has no limits and their turn will come.Fanaticism always spreads like wild fires and its demands keep growing.

“Cancel Culture” and boycotting are the latest faces of fanatics and fascists and extremists  and the mob taking away freedoms of expression and free speech and other freedoms.The new totalitarians insist that no one criticize their view of the world.

Now, even liberal writers, professors and activists have come together and signed an open letter in the hopes of ending “cancel culture.” Good luck in trying to put the monster called” tyranny” back in the cage dear liberal friends. Let them destroy monuments and statues and businesses and riot and burn. Just  blame Trump for everything  ! Just defund the police and all peace will come back and even the virus will disappear !