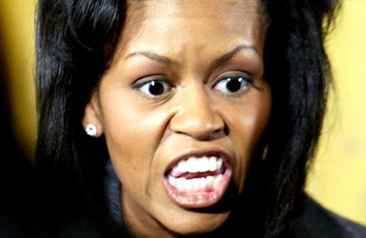 This woman, Michelle Obama,  is either really in denial or a poor, malicious propaganda artist. She is the one who said, “when they go low we go high”. Nothing could have been more false. Basically, the left say things that sound great but intend the exact opposite and do the opposite. Now she comes out and says that the protests were almost entirely peaceful and Trump is making it up that they are violent to create racial division. Again this is Goebbels speech because she and her husband are doing everything to stir racial divisions and chaos and accusing the other side of that which they are guilty of. The most corrupt first lady with the most corrupt President in history, the Obamas, are at it again.

The IRS, the FBI, the CIA, the NSA the DOJ were all weaponized against the people for the first time in American history. They created it. They built an America where the youth think that socialism is better than the system that has made this country the greatest country in the world and the super power of the world. They created it. This has been the country where everyone who can wants to come to.

Michelle, you are irrelevant despite the pandering of some lefties. You are a fraud of history with your husband Obama.! Antifa and BLM and defunding the police are all your doing and you should be ashamed of yourselves.You are the real  racists and your duplicity and misinformation ads are totally fake. You are fake and phony Michelle Obama, and you are a divider of people.Shame on you  ! you have abused your minority status and your being black is no longer good enough for you to continue being racist and stopping legitimate criticism of your person.

Saying the protests were peaceful is fake news and you are fake too. You are also extremely boring and predictable. You have only one advantage and that is that the fake news, MSM protects you and covers all your lies.