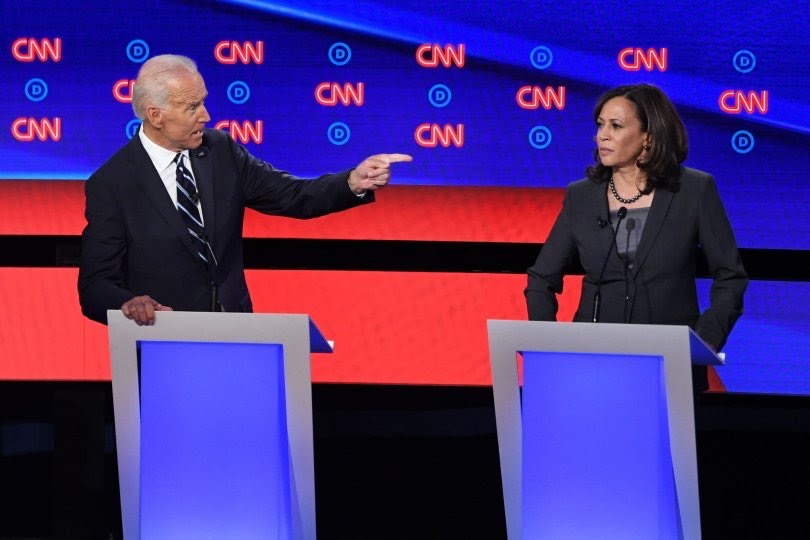 Fellow Americans, fathers, and mothers, brothers and sisters, sons and daughters, do not allow a bunch of fools and ignorants ruin your country, America. Many are doing this out of stupidity and because they do not know better. They are being driven by malicious forces who want to destroy America and what it stands for.If the fascist, socialist democrats win in November the greatest democratic republic in history will be defeated. Many foreign powers will rejoice in that, but for sure China, Russia and Iran are among them. Making wearing masks mandatory for three months, is not a policy or a solution to what America is facing from the left and what will make the future of America.That is what the clown in Chief, Joe Biden, and his running mate who barely polled 5% in the democrat primaries, Kamala Harris, are saying,
as though they have invented the time machine. They do not have a clue as to how to govern. Their only premise for their existence is to beat Donald Trump.

They do not have any policy, any vision, any new working agenda, any inspiring words or actions for you or the country. It is the typical partisan name-calling, smearing, demeaning, demonizing, and identity politics that has divided the country so bitterly. The American people have had enough of lies and distortions and misinformation and propaganda. ENOUGH !

The future of our children is at stake here. The future of the free world and western civilization is at stake here.
How stupid do they think that we are to entrust this duo.”flip and flop”to run the greatest office in the land and the world. How stupid do they think we are to masquerade a failed politician of 48 years and one who now has dementia and Alzheimers to run for any office, let alone THE PRESIDENCY.!
Of course they do not want debates. They are so rash and brazen, that they openly say so. They want vote by mail and no debates, all because of “safety”.They also prefer no rallies because Trump can draw  tens of thousands of supporters and enthusiasts but flip and flop will maybe draw a couple of hundred at the most, who will be bought and paid for.All this in the name of Covid-19 protection.
Be ready for the fake news MSM to have Kamala Harris attack Trump on every occasion. She will carry Joe around for the pretense that he knows what is gong on.
” I approve of this message, go Kamala, go”. Be ready for the corrupt mass media industrial complex to make the coming of Kamala Harris as the Savior of the people. The Messiah has come and it was her.!